skip to main | skip to sidebar

Cheezfergur has sort of moved, everybody.

If you're looking for the comic on Cheezfergur Hub, you might be in the wrong place! Here is the new website, which will host my webcomics as well Smoothie Home by Solomon Fong and Sammy Martinez.

http://scribbledemon.com/
Posted by Emery Ferguson at 3:32 PM No comments:

Posted by Emery Ferguson at 1:44 AM No comments:

Some Things Are Worse.

This is a 100% true story, Internet. You're probably thinking "One of these guys probably just got lucky and didn't say anything." I wish that were the case, it would actually be pretty cool. Unfortunately, It happened on a night when no one was home and everyone was accounted for. Also, we know for a fact that they had not been there earlier in the day since people had been in and out of there. So where did they come from? It's a mystery. A very troublesome one. Jonathan in particular is bothered by it. Best we can figure, some drunken partier thought they were in their own place, realized they were not, and booked it without her underwear.

Also, Enjoy this bonus color strip just because I liked it so much.

Posted by Emery Ferguson at 5:21 AM No comments:

I bet, for a brief moment, you thought it might be the kitten that bit the dust.

I'm not that mean. XD

Although at this point I have, if you assume Emery got eaten and not that he went to McDonald's or something, violently killed each of the main characters except Jonatron. Solomon really is allergic to cats. I found that out when I asked if anyone knew that we could have pets at our place. Our upstairs neighbors have a kitty, and there are some huge dogs roaming the complex sometimes. I don't know what'd happen if Solomon encountered one of them, but I imagine it is something like this.

Also, check this out.

Stuff to look at. 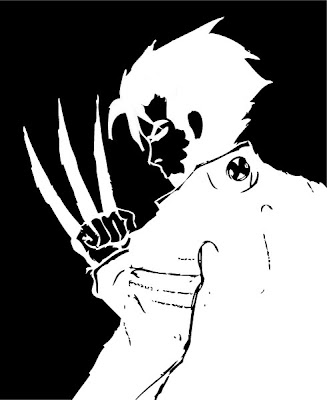 Sorry, homies. There might be a comic later if I can swing it, but this is not a guarantee. I had to write a ten page page paper (with the works cited and interview stuff it actually came out to more like 21 pages @______@) as well as a midterm on Thursday and there simply was no time.

You guys know I hate to leave you hanging though so I'll see what I can do.

In the meantime, here are some things I've drawn and/or Illustratored lately that you might light to see. The one above is an old drawing of Wolverine I did. 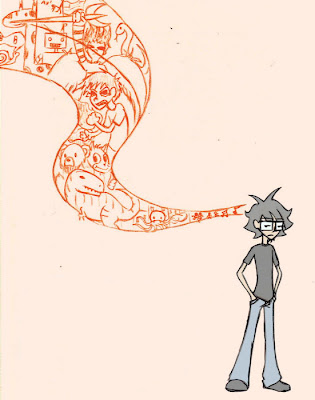 This is the first real page of my new sketchbook. I was playing with some colors. 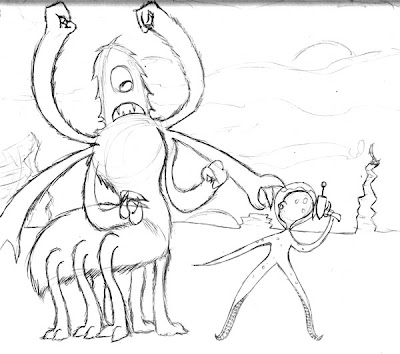 I want to do something more with this one, but for now it's just a very sketchy alien fight on some distant planet. Maybe I'll go back and ink it later. 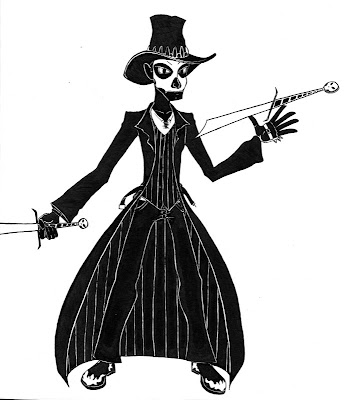 Some of you might remember my Halloween costume from last year. I did a drawing of that once, and I liked the way it looked enough that I decided to try and refine the idea so I could turn in into a usable character. The above is one of those attempts, you see. I may try other things with the look. I have dubbed this character Donny Jonks, and this particular piece was done with pencil, ink, and Sharpie (hence the wierd texture in some places).

Speaking of old drawings of characters, I was messing with this old Adobe Illustrator image of Rosetta Stone to see if colors other than Green and Black might work better. I think I'll stick to my original design, but what do you all think? Is there one in particular one you like most? Feel free to comment. 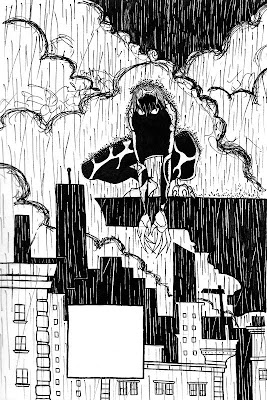 And while we're on the subject of Bound characters, here's an unfinished piece that I referenced like 7 million Spider-Man pictures for. It's Rush on a building in the rain. If the white square confuses you, that's because it is a second panel that I have yet to draw out.I also need to clean it up some. I used pencil and ink for this one, and hoo boy, did it waste my pens. I really like how it came out though.

Anyway, I'll try and scratch out some sort of comic tonight. No promises, though. =\
Posted by Emery Ferguson at 3:30 PM No comments:

You know those days when there are no snacks in the house, and you are so hungry that even your roommates or friends begin to look appetizing? Yeah, this one is about those days.

What? You say you've never had a day like that?

Whoops! Sorry this is going up so late in the day everyone! Believe it or not, I totally forgot about the comic. I finished it yesterday, but I forgot I was supposed to you know, update. < <

Anyway, it has been sufficiently cold enough for me to wear much of my non-t-shirt clothing around here. The chilly weather has lasted several days, which is unusual for Austin at this time of year. Normally we'd have a cold front roll through for a day and then we'd witness the return of the sun. I, like the fool I am, would believe it'd be cold for a few days at least, and would be prompted to grab that jacket or sweater that I bought in the summer and couldn't wear until now and then...disappointment. The sun would be out and it would be warm again.

So I'm enjoying the cold while I can. The first thing I did was grab one of my argyle sweaters. XD
Posted by Emery Ferguson at 2:26 PM No comments:

Where I Can Be Found

Things You Should Read

Emery Ferguson
I'm a Radio-TV-Film student at the University of Texas at Austin. Mostly I just draw though. I'm the creator of The Bound and also the Wierdest City, which my friends and I write/illustrate over at the closet artists website.